Fred being honored on his last day at Westfields in 2016 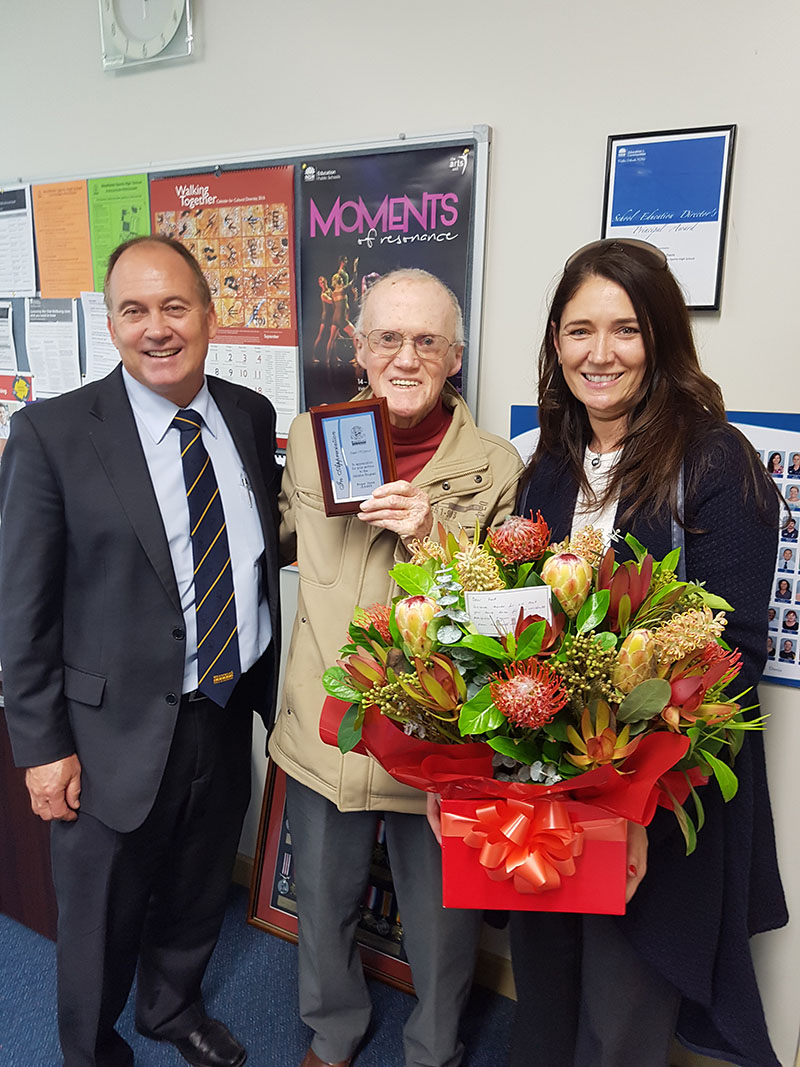 Westfields Sports' dearest family member, life member and coach has passed away after a two year battle with cancer. Fred will be long remembered for his 25 years of service to our school.

Having produced an Olympian, a World Champion, a Commonwealth Champion and numerous World Youth medallists in athletics (Fabrice Lapierre, John Thornell, Naomi Bligh, Kurt Jenner, Dale Jenner etc.) Fred will remain as one of Australia's leading and most experienced coaches.

In 1928 when Charles Kingsford Smith completed his around the World flight Fred as a young boy rode his push scooter to Mascot to witness his famous landing.

1932 Fred rode his push scooter from Mt Pritchard to the opening of the Sydney Harbour Bridge.

In the 1940's Fred was one of the RAAF engineers who solved the carburetor stalling problems of the Australian Spitfires at altitude during the WWII New Guinea campaign against the Japanese.

1943   Played 1st, 2nd and 3rd Grade for Newtown RFL and eventually planted into 3rd grade team towards the end of the season and played in the grand final winning 3rd Grade competition for the Newtown "Blue Bags".

1947        Fred was ranked number 3 in the World for Triple Jump leading up to the 1948 London Olympics. Back then one had to pay 250 pounds to the selectors for the right to represent Australia and unfortunately Fred could not afford that so he decided to get married instead of going to London. The other Aussie, George Avery, whom Fred would always beat ended up winning the Olympic Silver medal.

2014                 I nominated Fred for the Order of Australia and requested it be fast tracked due to his age. Normally this is not possible, and the nomination can take up to 18 months to process. Needless to say Fred was a special case and he was awarded the OAM within 7 months.

Throughout his career he has played 1st Grade Cricket, Soccer, Basketball, Australian Rules Football and Rugby League for various clubs.

Fred has travelled all over Australia and the World with Westfields athletes. He has been to Perth twice, Hobart 3 times, Launceston twice, Adelaide 4 times, Brisbane 4 times, Melbourne 3 times, Canberra 4 times. Brazil twice, Italy, then as an athlete America, South Africa and too many other places to mention.

Fred lived at Epping North. In the past 25 years Fred has driven 3 times  per week to Westfields for a total of 187,000 kilometres. To put that into persepective that is the same as driving around the world 3 times, or driving from Sydney to Perth 46 times or half way to the moon.

Fred Retired from coaching at Westfields in November of 2016 due to his failing health. He lived alone at home for several months until he voluntarily checked himself into a nursing home in Epping. Fred was not shy to say to all who visited him that he was working hard at masking the pain through positive thinking. Always happy to take visitors Fred would perk-up for the duration of the visit and carry on as usual. His mind was very strong and sharp until the end. Only his body eventually gave in to the cancer.

Dear Fred you will be in our hearts forever.

Dan Suchy and the Westfields Family

Note: We have received a request from Fabrice Lapierre in the USA (Fred's highest achieving athlete) to delay the memorial service for Fred until he can attend. We will honour Fabrice's request and at this stage the Service will be scheduled for Monday 24th September 2018 at Westfields Sports.

Return to top of page

We would like to pay our respects and acknowledge the traditional custodians of the land, the Cabrogal people of the Darug Nation, and also pay respect to Elders both past and present.

Copyright for this website is owned by the State of New South Wales through the Department of Education. For more information go to http://www.dec.nsw.gov.au/footer/copyright.